Focus and sociability contribute to a child becoming a successful adult

You should remember the famous marshmallow test, conducted in the 1960s, to assess the self-control of children aged 7 to 9. They could choose between attacking the candy immediately or waiting for the researcher to return and gain two goodies. The result showed that those who could wait for the double reward had more success in adulthood. A new version of the research has just been conducted by Canadian scientists using data from 2,850 participants in a longitudinal study (conducted for a long period) with preschool children from Quebec (Canada). Later, they were tracked from 33 to 35 years.

This time, scientists have found that paying attention, that is, to stay focused, is the main factor that contributes to a child’s success in the future. On the other hand, the most sociable are more likely to secure better wages years later. That is, this study revealed that focus and sociability have to do with success in the future. “Parents are responsible for welcoming, encouraging the little one to express their feelings and face frustrations. Thus, we favor self-esteem, cognitive development and empathy. All this will certainly make a difference in the future,” explains pediatrician Gabriela Judith Crenzel.

This site uses Akismet to reduce spam. Learn how your comment data is processed. 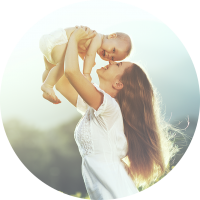 Raising children is challenging and there are many questions that concern parents, whether it's to teach your children to have better manners, habits, and behaviors and, especially, health issues. The Lovely Moms is a website with information on various aspects of the early years of and includes discussions and articles about giving birth, fostering, adopting, benefits for children, childcare and schools. You are very welcome to participate with your suggestions and tips.

This website uses cookies to improve your experience while you navigate through the website. Out of these cookies, the cookies that are categorized as necessary are stored on your browser as they are essential for the working of basic functionalities of the website. We also use third-party cookies that help us analyze and understand how you use this website. These cookies will be stored in your browser only with your consent. You also have the option to opt-out of these cookies. But opting out of some of these cookies may have an effect on your browsing experience.
Necessary Always Enabled
Necessary cookies are absolutely essential for the website to function properly. This category only includes cookies that ensures basic functionalities and security features of the website. These cookies do not store any personal information.
Non-necessary
Any cookies that may not be particularly necessary for the website to function and is used specifically to collect user personal data via analytics, ads, other embedded contents are termed as non-necessary cookies. It is mandatory to procure user consent prior to running these cookies on your website.
SAVE & ACCEPT